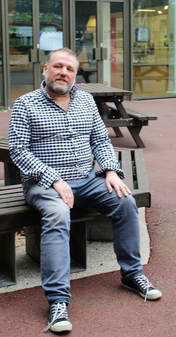 ​"I became a poet, when I could've been anything and certainly something more useful, rather than a fiction writer because poetry felt closer to self-expression. It was abstract, punchy and immediate."
The inspiration for all the poems I have written and am still to find lurking in the vast unwritten poem pile comes from a seething block of blistering, uncomfortable fire that is lodged somewhere obscure in my being. It makes me want to say a lot of things and be creative. It seethes daily and has done for over thirty years now. I've never been able to staunch its bleeding, even if I'd ever been self-punishing enough to have ever wanted to.

I turned up at poetry's backdoor having being made homeless from my previous state of desire to make good racket from a cheap guitar, a milk curdling voice and some semblance of a truth, unburdened by any prior knowledge of the holy art and thus uncrippled by debt to the supposed masters, but driven by the desperation to be something I'd never been before and to stop being crap at everything. I became a poet, when I could've been anything and certainly something more useful, rather than a fiction writer because poetry felt closer to self-expression. It was abstract, punchy and immediate. It can also be funny, things that appealed to me and things I desperately wanted to do more than anything else.

Often it feels as if I'm a magnet for forgotten feelings and vague memories. Every sight, sound, taste, aroma seems to be connected via symbolic transmission to some higher endless narrative, and even the slightest trigger from any of these can set me hurtling headlong toward a poem. It's always a question of finding the right canvas for me to paint their picture in words upon, finding something to say is easy, it's how to say it that is harder. A few words are just that. A few words crafted into something that takes off and tells a truth is much more difficult. I try and write poetry that hasn't been before, to take an abstract and re-imagine it as something that definitely is.

It's rare now that I finish a poem without gruelling gut-wrenching gestation, sometimes one that can last years. I am permanently up the duff with a range of expectant poems ready to push themselves out into life and take their bow. Two poems have been hanging around in my head for about fifteen years now. Occasionally they knock and remind me they're there still keen to join the fray, but in all this time I've yet to find a suitable architecture for them to shout from the rooftops like gutter angels what they need to say that they alone will explain the world a little better in.

Once my initial impulse has allowed me to milk it for these few humble words I begin the all-star grapple match between graft and craft. As soon as there are enough words to hum I begin looking for the melody. Not always a smooth one, but one that can put over my state of mind (which is usually stress, anxiety, rage, fear, pain), so often I search for rhythmical discordance, to write off-kilter and one step off-beat. I compose jagged music because that is where my head is at at the point of creation.

So there's a tune, a sense of music to give the words a beat to shuffle awkwardly along to while they try to construct a magic dance that will make them sparkle and fly into the bosom of the reader.

Next, I look for the angle I need to take in order to cleave through layers of fat armed only with a blunted Bic to find the essence of the ailment in need of expulsion so it can be turned into gold nuggets I tell myself the world desperately needs to dazzled by. Once I'm past the guts, and through to the bare bones, I play around with all the voices I can impersonate and views I can see from atop the molehill I'm trying to turn mountainous and get the feel of the timbre and eyes I need to adopt.

When I'm here blocked with a poetic bile ball of indecipherable squiggles masquerading as the first minor droplets of an almighty storm, the agony I'm going through as I try and make is akin to having a screaming tumour crying out for instant removal. None of this process is enjoyable. To wretch up something worth saying then to have to sift through the reflux and vomit produced as prelude is unpleasant. If this was the end, if these dark stains upon the glorious meadow were the final blooming there is no way I'd ever be stupid enough to write another word in the vainglorious name of poetry. But it isn't. The pleasure, that exquisite thrill, that perfect shot of foul adrenalin is all about to come. Because if I've made it this far, if I've found enough glorious stars in the fetid puddles of sterile words, faint traces of genius and jarring juxtapositions to make a celestial sky, then I reckon I must be onto something, so I plough on, my steps becoming jauntier as I sense the very real possibility of a successful birthing.

What has occurred from me over the previous days and weeks of lonely mining is still a dense dark passageway of dead ends and exits and not a poem yet. But it has shown enough, created a buzz around itself, to suggest it could very well be. It's a sick, jibbering blob lying on the lined slab of my big notebook where I collate my jumbled thoughts, a fenced off corner for things that may and often should never be. To revive the stillborn corpse, to blow life into what it once promised to be, because by this time it isn't anything like I thought it was going to turn out, I need to stop it shifting about and to anchor it's wobbliness down. To turn the abstract into a definite, I have to see a map from the mass of confusion to create a shape for the gush of expected words to slide down on its quest to seed the world with word as it slips down between a and b.

I know by the learnt instinct of the wise old poet in full possession of his or her poetic license what shape a poem should be, what curves, straights and assorted detritus it needs to clear and gallop down in order to produce a suitable architecture and landscape for the poem to swagger through on its way home like a conquering hero never in doubt of their inevitable brilliance. And so now I pour the words out onto my second notebook, a smaller more battered affair full of seemingly endless pages for me to cover, the one that only the fittest reach, and begin shepherding them down the page along the unwritten route only I know. When I reach the end and it feels like the end, when I have filled the shape up with verbs, nouns and adjectives I declare it a poem. But not yet a finished one.

At least now I have a tangible thing and I know it's a poem. But it's one that almost certainly won't be quite right. The texture and context are permanent now but the wiring that makes the words flow will need tinkering with to make it purr properly. So I begin tarting it up. Untangle all the messes and make straight lines from them. I slap words and I tickle words, I knock words I'd twisted until they were permanently misshapen back into shape and remove brilliantly flawed lines and cast them into the wilderness like let-down prophets. I nudge and nurdle. I scrape and replace. I bodge lines together from disconnected others and have the best time of my life engineering my raw material into something sleek and magnificent. And if I've got this far, I know my tinkering will be worth it, and it always is. I don't trust a poem that comes fully formed; I need to spread its innards and drown in the gizzards of a piece and perform surgery as if I'm performing a completely different cover version of my own work. And I love this process so much, the smell of freshly writ poem, all lovely and full of potential like a newly born mutant, it's what I keep coming back for. It's why I keep on leaving home without a map and feeling my way back there via all the back lanes and dark crescents knowing exactly where I'm going even when deep down I haven't got a clue. This thrill, this painful, exquisite thrill in all its tatty glory, is why I am a poet.